Getting the most from a roll of film

I mentioned this in an earlier installment in this series, but it bears repeating just to make sure everybody gets this advice.  Cut the film for the wings first.  Then cut all of the largest and longest fuselage pieces.  Finally, use the remainder for the smallest and oddly shaped pieces.  If you go straight to the tail and cut out a bunch of oddly shaped pieces first, you may not have enough left to cut large pieces for the wings.

Here’s another piece of good advice.  If you can’t fit all of your big pieces without splicing one or more of them, you should cut the wing top pieces first.  If you have to splice something, splice the bottom of the wing, or some inconspicuous spot on the fuselage.  Don’t put a big splice right in the middle of your wing where it’s the first thing you see when you look at the plane.

Getting the film separated from the clear plastic backing

Sometimes you have a hard time getting the plastic off the back of your film.  Some brands are more difficult than others.  Generally, I’ll fold about a quarter of an inch at one corner, then fold it back, and the backing will separate.  Then it’s easy to pull it off.  Sometimes I’ll dig into the backing at one corner with a sharp X Acto knife blade to pull it away.  Sometimes it’s hard to get anything to work.  In this case, get two pieces of office tape and stick one piece to each side of the film so you have a handle to pull the backing away from the film.  Thanks to Randy Shiosaki for mentioning this.  It’s a pretty good tip.

For those who are really absentminded, sometimes you try to stick the film to the plane but no matter what you do it won’t stick.  Maybe you forgot to take the plastic backing sheet off.  I have to confess I have done this before myself, and I even caught my friend doing it.  He couldn’t get his patch to stick on and he thought he had failed to clean all the oil off the plane.  It turns out he just didn’t pull the backing off.

Burning holes with a heat gun

In the following series of photos I am tightening a Monokote test panel with a heat gun, and then I’m burning a hole just to show what it looks like.  If this piece were being taken seriously I would have moved the gun around to shrink all of the wrinkles.  Instead I held the gun directly in the middle of the square until it burned a hole so you could see what would happen.

First the film darkens a bit and then it shrinks. 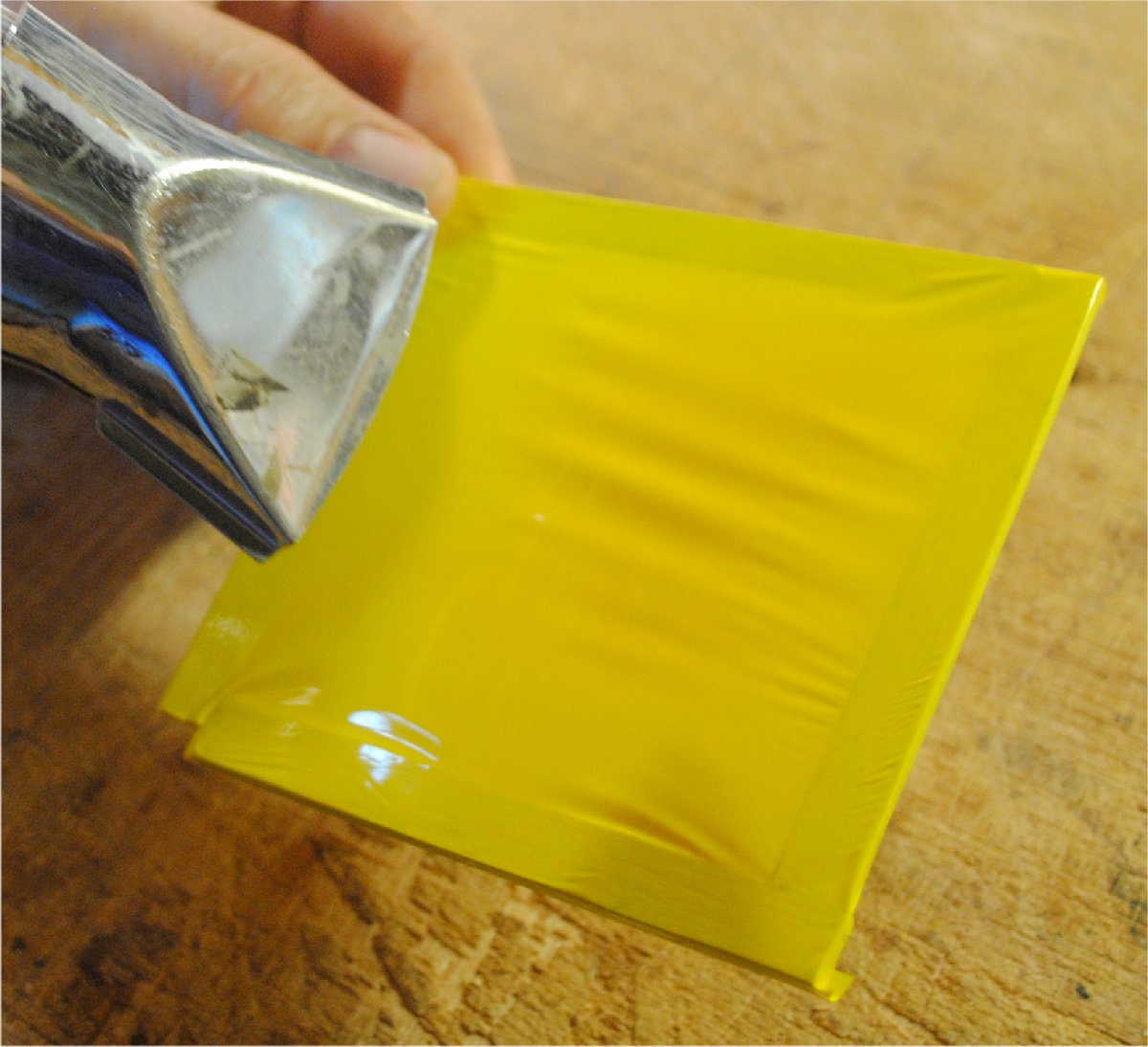 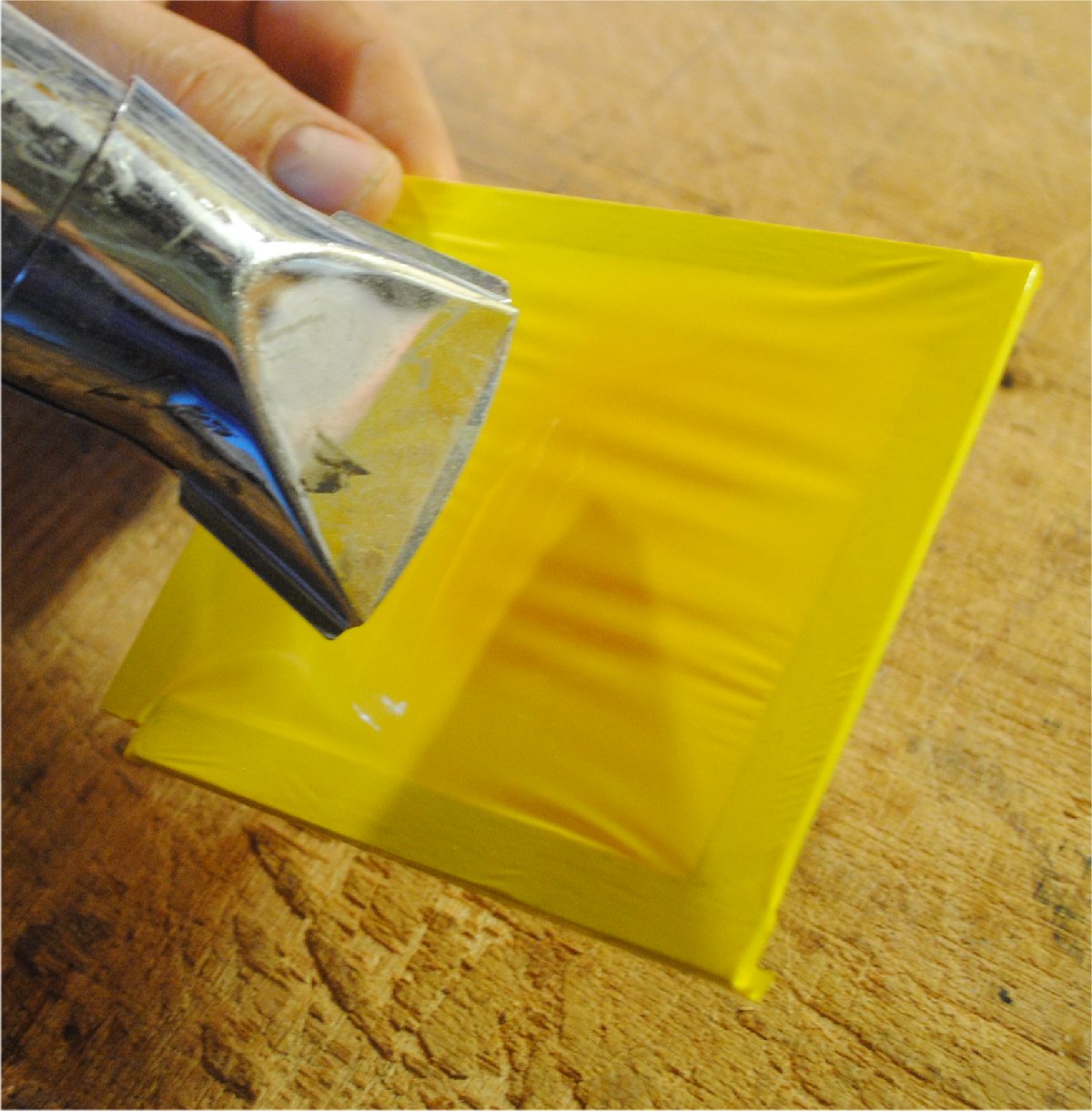 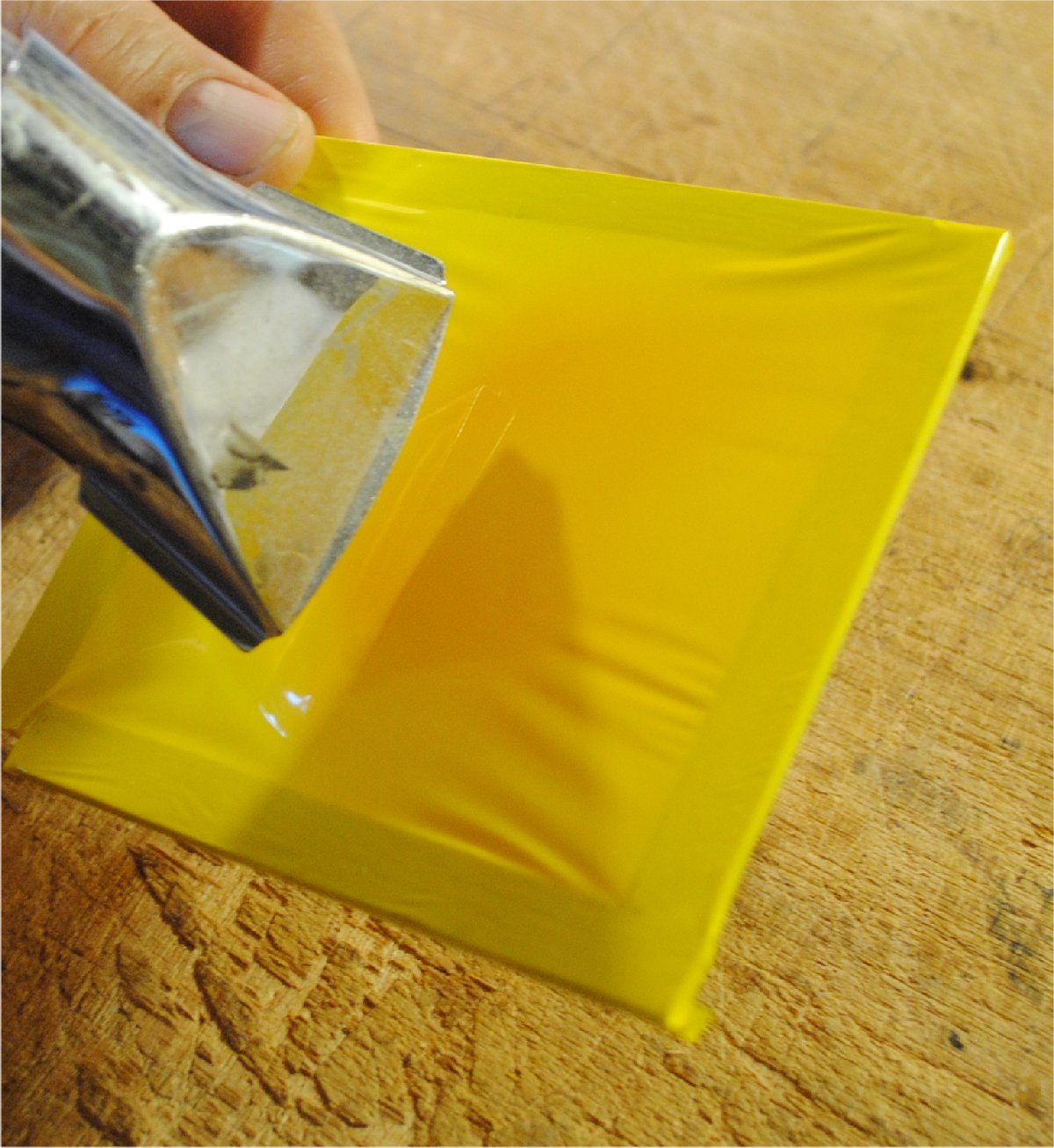 As you can see, where I am holding the heat gun in the middle there are no wrinkles remaining.  On an airplane, the next step would be to move it over a bit and shrink the adjacent areas, then STOP.

Instead, I held the gun right over the center for about another two seconds and this is what happened. 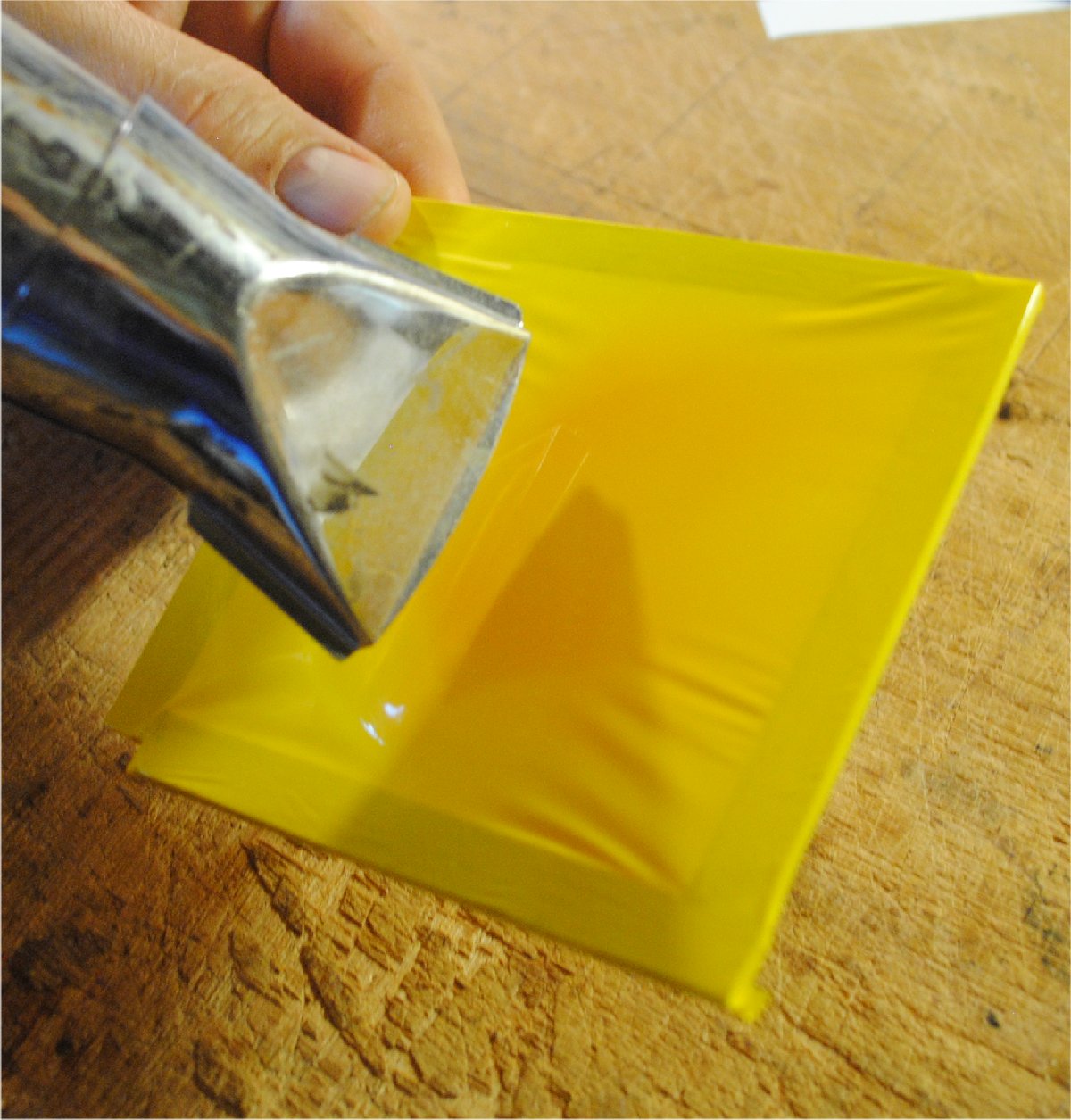 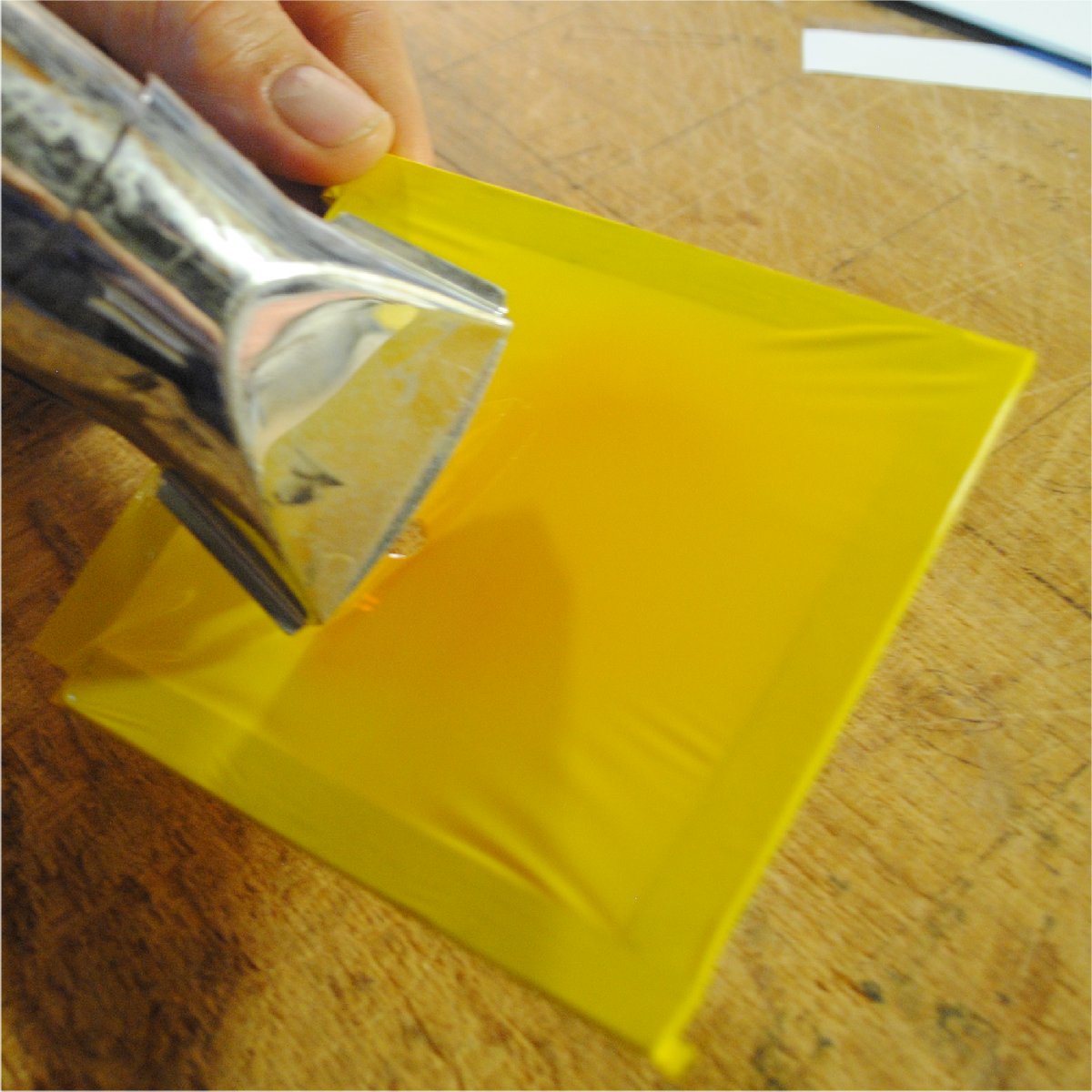 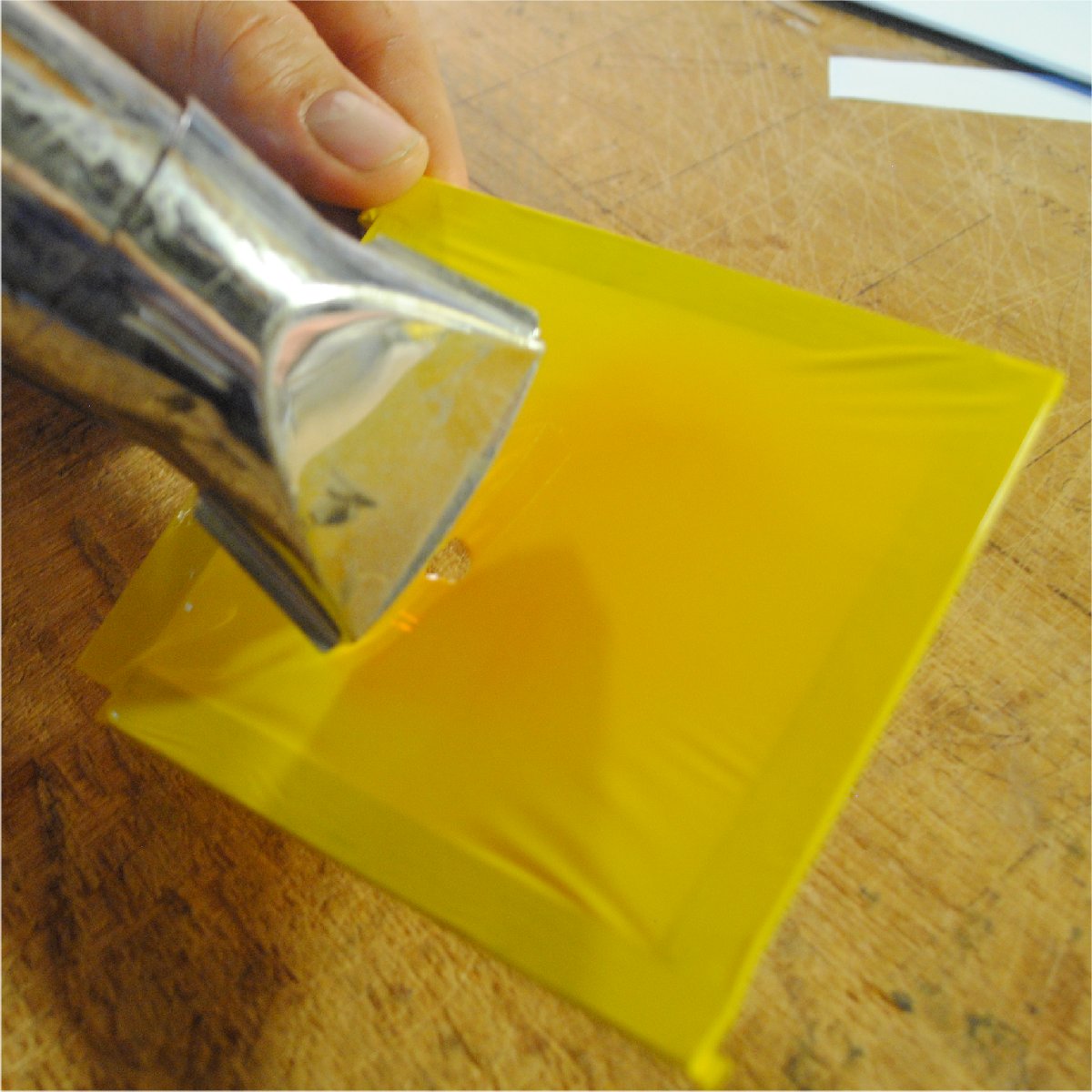 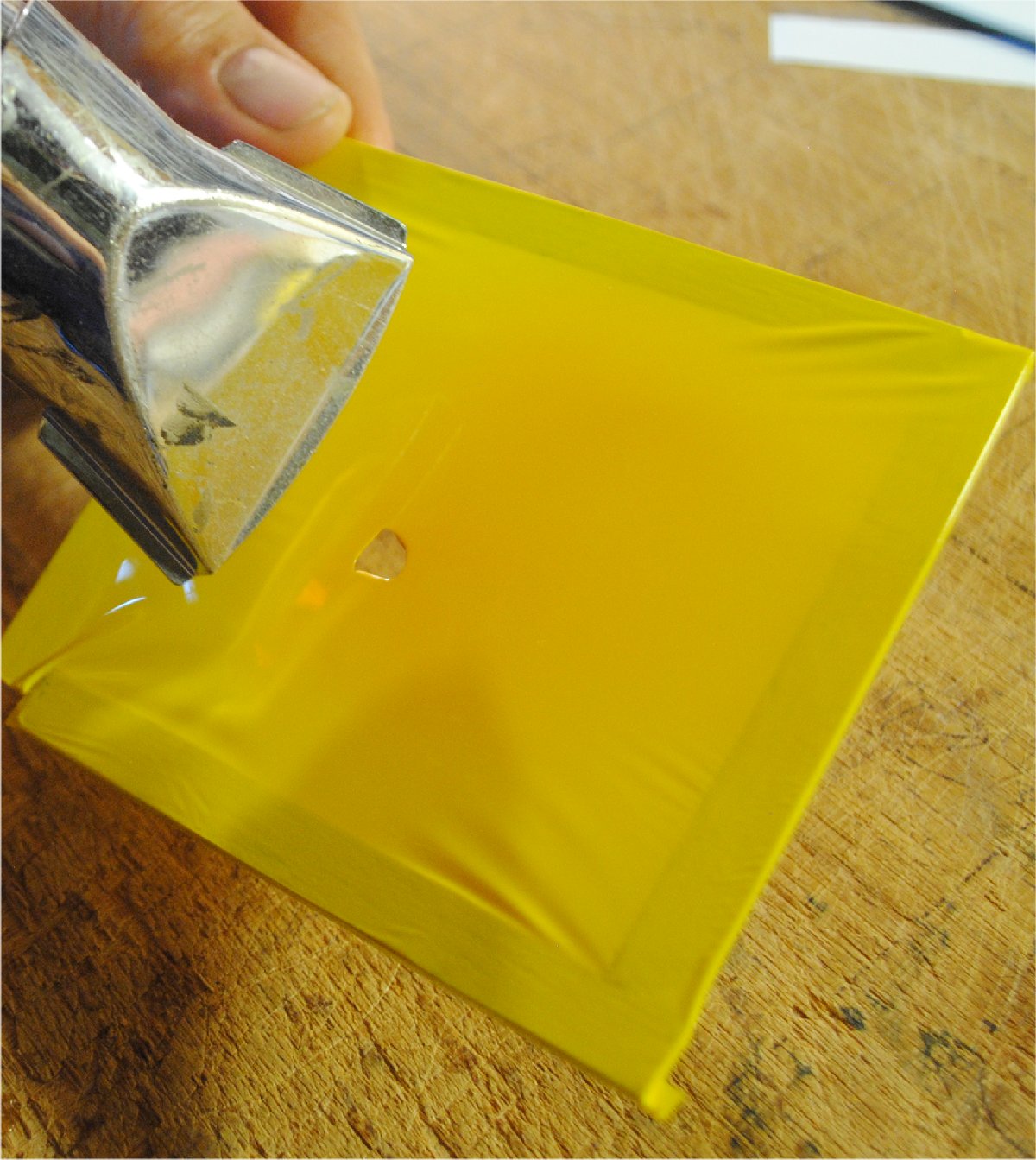 When heated the film will change color and loosen a bit.  If you move the heat gun when this happens, you will be able to see if you have heated it enough.  If it doesn’t tighten as it cools, go back and heat it a bit more.  There’s a critical temperature where it will tighten while being heated.  In cases where the film is a bit too loose you have to get it to this temperature.  Just keep your eye on it, and if it looks as if it’s starting to do what you want it to do, stop heating it.

If you have installed the film with a lot of slack, you will be tempted to put the heat to it and blast it until it submits to your will.  If you’re going down this path, you’ll most likely end up with holes burned in it.  So get it tight in the first place, then do your tidying up with supplemental heat.  And the best part is that there’s always next time.  You’ll get it right eventually.